Phoenix was found barely alive at Ground Zero in the ruble of the 9/11 attack. She was terrified and would attack anyone who came near her but after a few tries she was finally rescued.

Although Phoenix was one of the few lucky pets who could survive and get rescued after the WTC attack, she suffered the consequences of that horrific day, the rest of her life.

She suffered from chronic asthma, eye and ear damage, and other health problems caused by the explosion and aftermath.

Phoenix was welcomed by a wonderful family that had special needs dogs and cats and she gradually grew less fearful, however, loud noises and thunderstorms always terrified her.

After some time, she started to approach shyly the members of her new family when she wanted to be petted and it didn’t take her much longer to feel at home and rediscover her purr.

Phoenix could often be found hanging out with 3 other cats of the household: Jonah, a cat who lost a leg to abuse; Harmony, who had a rare muscle disease; and Reiver, a cat with cerebellar hypoplasia.

She could be seen gazing out the window, snoozing in the sun on the floor, or happily lounging on the couch.

Years later, Phoenix had to be rushed to the vet hospital for a problem in her abdomen and sadly she crossed the Rainbow Bridge one hour after emergency surgery.

“She had a remarkable spirit and we are so thankful for the special years she was a part of our family.” her dad said. 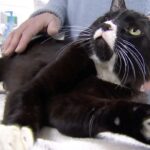 Snowflake, a Ukrainian deaf cat that found shelter in a treetop

Little Scruffy was found in a garbage truck
Share